At Home With Topsail

Welcome to our blog, At Home With Topsail! Here we will discuss the history of Topsail Island, the real estate market and area happenings around Topsail Island. Please feel free to comment, we'd love to discuss Topsail with you!

But with any new endeavor there are things to consider and not to surprise you, buying coastal property comes with its own implications and processes to help ensure a wise investment.

Waterfront property on Topsail Island is great and sure to be a sound investment with lasting memories if you are prepared and knowledgeable in the purchase process.

Our agents have sold many waterfront properties and strive to stay on top of all the implications, contact one today if you think local knowledge is beneficial to you!

Posted in Topsail Island Real Estate Information
no comments yet

Lewis Realty Associates, Inc. Files a Petition for Exemption to FAA for Use of "Drone" in Real Estate

Over the past three years, Chris Rackley, President of Lewis Realty Associates, Inc, has been searching for a viable platform for aerial photography that did not involve a traditional aircraft. His hope was to one day use it in the real estate business at Topsail Island, NC. In the beginning, the technology was barely there.  It took several attempts of different UAVs and setups to find a solution that was safe, viable and produced consistent results. Chris stated, "We I begun flying around the island as a hobby I was the only person with this type of aircraft. It as changed dramatically over the last three years or so with several people in the area flying." 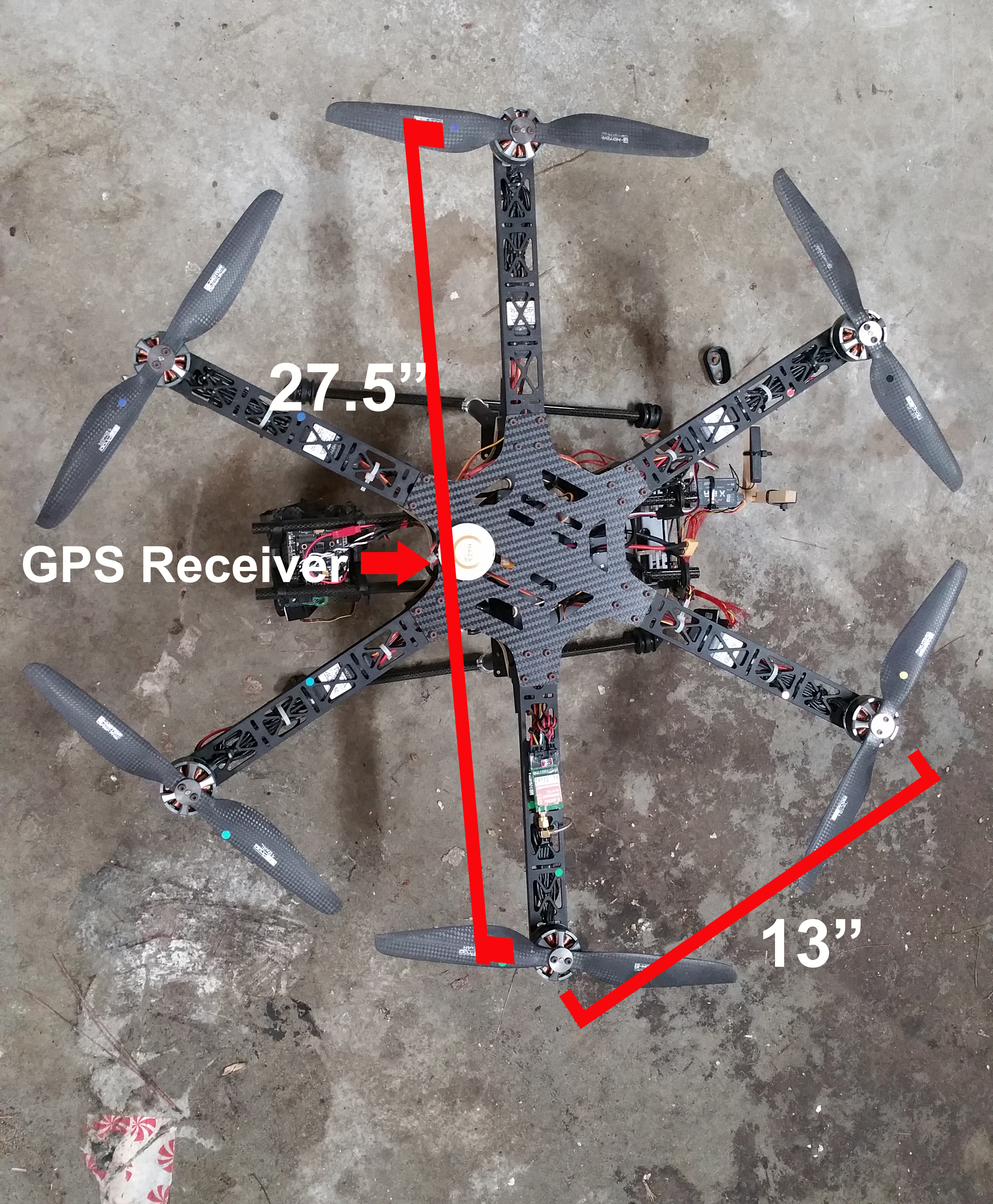 blades), hexacopters (6 blades - see photo of Chris' "drone") and octocopters(8 blades) along with other UAS type machines. The word "drone" creates an image of a menancing missle laden machines set on destruction mode although that really is not the case. "Drones" could be used for search and rescue, real estate marketing, surveying, research, etc. They really are the wave of the future.

The "drone" in the photo is Chris'. It is a custom hexacopter with 6 12" props, gps flight controller (flight is aided by GPS), 3 axis camera gimbal (keeps camera level and allows control of camera from the ground while in flight), video transmitter (so the pilot can see what the drone sees on a screen), retractable landing gear to give the camera a 360 degree view with no obstructions. The hexacopter also has many safety features with a return to home autonomously in the event of low battery or emergency, hover mode (requires no pilot input to hover in place), several LED beacon lights for visibility and even a gps enabled flight restriction (prevents flying too close to an airport).

Chris further added, "I was held back from actually using the technology in our business by a FAA policy that prohibited commercial use of RC aircraft. Although some people were able to fly below the radar of the FAA it just never seemed to be a risk I was interested in taking."

The use of "drones" or UAVs for any commercial use is not permitted by the FAA of the United States since the technology trend has surpassed the current regulations. However, the FAA has begun moving forward with petition's for exemption under Section 333 of the FAA Modernization & Reform Act of 2012. Companies like Amazon, Google and others have already file for exemptions.

Early in January 2015 a Realtor in Arizona, Doug Trudeau, was granted an exemption to fly his small drone to use in promoting the community and real estate listings. This was huge news because he was a small business!

Chris through his company Lewis Realty Associates, Inc began investigating the petition process and what rules he would need to be exempt from. On January 26, 2015, we successfully submitted a petition to the FAA for permission to fly our 3.3 pound hexacopter in connection with the real estate business.

The FAA website advises that it could take up to six months to have a decision. It appears most likely Rackley will have to obtain a pilot's license to meet the regulations if the petition is approved. Meanwhile Rackley can only fly for fun which is not a bad thing at all!

Lewis Realty has always strived to stay on top of technology with internet marketing, advanced office systems and hopefully in a few months will be taking to the air in Topsail Island!!

Posted in Company News
no comments yet

Lewis Realty Associates, Inc. is pleased to announced that they have added Linda Manning to the sales team serving the Topsail Island area. 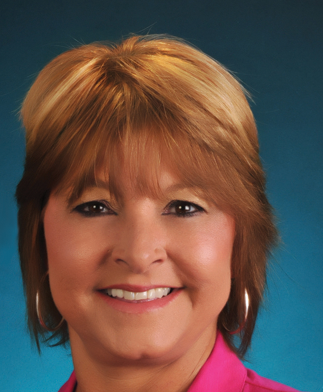 Chris Rackley, President of Lewis Realty said, "We recruit Linda originally as the property manager but knew with her vast sales experience that she would fit into our sales team somewhere in the future. I am very excited that she was interested in moving to the real estate sales team for 2015."

Linda has a drive to succeed like no other and makes your goals her goals. A very recent past client of Linda's stated "She wanted everything done to perfection".

Contact Linda if you are looking for someone who listens to understand your goals and then goes to work for you with success in mind as the end result.

In a recent Star News Article, I learned that once again the Town of Topsail Beach, NC is considering paid parking to raise revenues.

This was also considered back in 2013 but thankfully did not come to pass.

Don't get me wrong, paid parking is not evil. It is needed in some areas, New York City, LA, and yes probably even Wrightsville Beach, NC among any other area where visitors exceed parking spaces but still continue to come.  But not in Topsail Beach, NC!!

Topsail Beach is a long ride to the south end of Topsail Island. It is not easily accessible, it 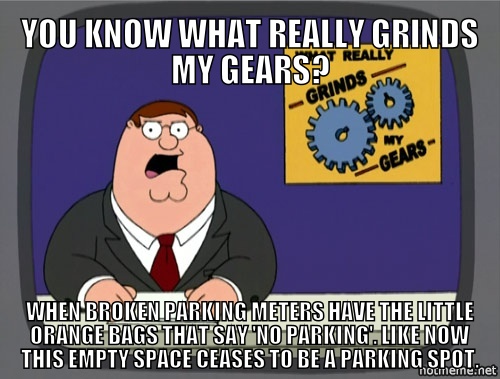 is not a "pass through" area. It is a destination that offers the beach and the ocean, same as the two other towns on the island (not to say Topsail Beach does not have a great personality, I love it!). But are "day trippers" or "beach go'ers" going to continue to travel to the south end, passing the beach and free parking in Surf City and North Topsail Beach to go to Topsail Beach and pay to park? No.

So without becoming an economist, it's easy to theorize that what revenue will be raised from the paid parking will be offset with the revenue lost from local businesses.

Topsail Beach has done some great things in recent years with a new town marina, parking area at the south tip, beach restoration and expanded water capabilities to just name a few off the top of my head. I understand they must need some additional revenue. There has to be other ways without decreasing the town's one industry . .Tourism.

I will say it again . . .I love Topsail Beach, I really do, but I must disagree with this idea and say emphatically DO NOT DO IT!!

I encourage everyone to voice your opinion on the matter whether in agreement or disagreement.

Posted in Topsail Island News
no comments yet

Just a collection of Topsail Island Memes for nothing more than fun! Please feel free to share with your friends through social media, email or how ever ya like to share!!

Check Back Often, We are adding this all the time!! 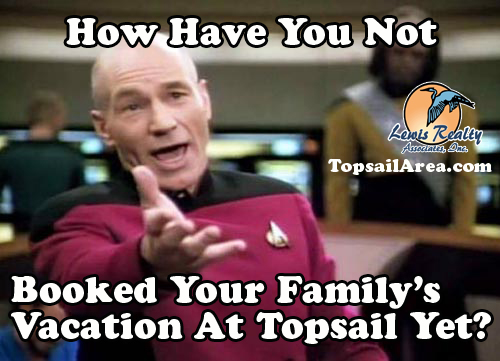 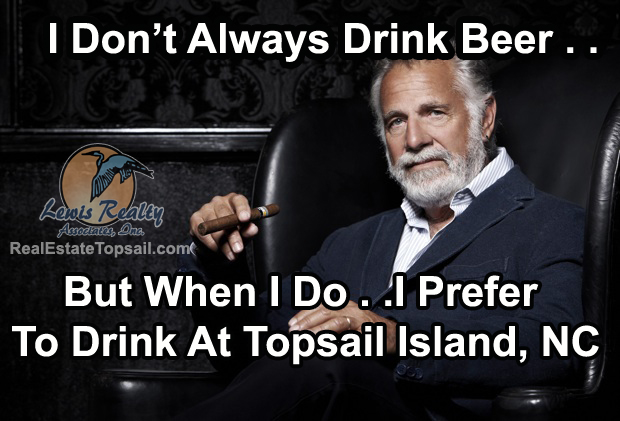 Posted in Fun Topsail Stuff
no comments yet

Topsail Island has exciting news coming from the Topsail Island Chamber of Commerce! The Topsail Island area will host the "Fireball Run - Space Race" in September 2015. The Fireball run is describe as an action packed trivia based car rally with the teammates as the pawns and America has the game board.

The Fireball Run - Space Race starts in Hartford, CT and ends in the Florida Space Coast 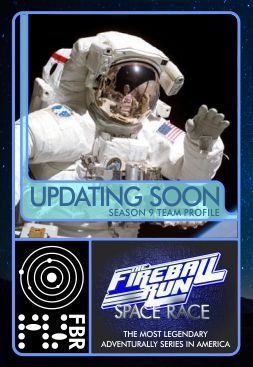 (Cape Caniveral/Cocoa Beach). There is no other perfect Fireball Run for Topsail Island since the rocket technology of today owes some credit to Topsail Island and Operation Bumblebee in the 1950s testing rockets on our beaches. Here is a promotional video about the Fireball Run - Space Race.

Contestants and guests of the Fireball Run will include but not be limited to Astronauts from the United States, Brazil and India along with several large corporation owners, politicians and some celebrities.

We are currently awaiting the actual schedule of local events which will include a reception among other things.

Proceeds raised for the non profit event will go to Child Resue Network for missing children.

We will post more information as soon as its available but go ahead and count Topsail Island in for the Space Race!!

All of our case studies are from actual homes or properties we have managed to show our track record. 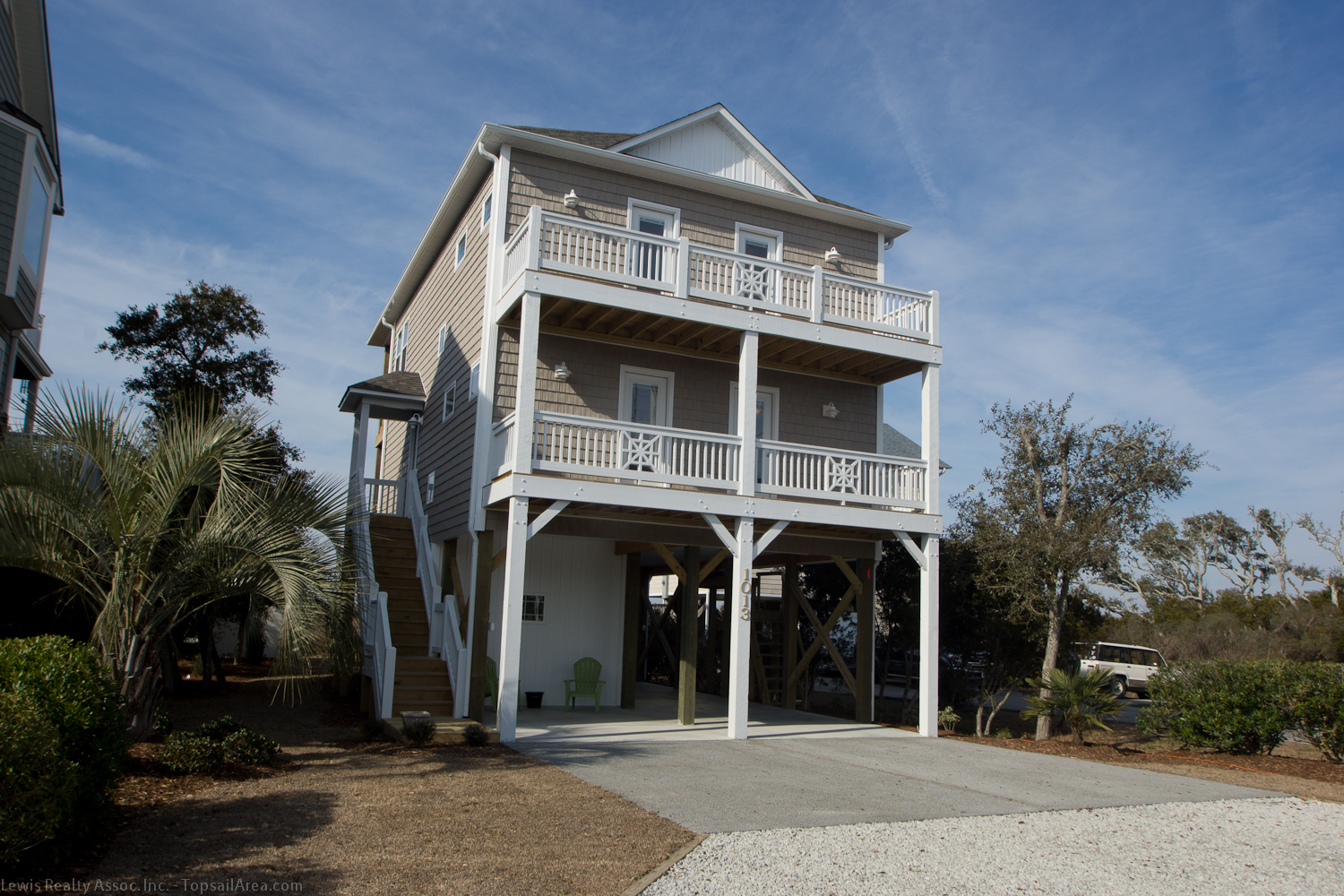 Lewis Realty Associates, Inc. was contacted by the owners a few weeks before the home’s Certificate of Occupancy was issued to project pricing, offer furnishing recommendations and begin crafting a marketing plan.

Being in the winter time or off season, Lewis Realty Associates, Inc. secured a seasonal tenant that earned extra revenue for the home instead of allowing it to sit empty during the off season.

The seasonal tenant left in the second week of June and the vacation rental bookings began two days after the latter tenant’s departure. The home was continually booked throughout the season back to back, week after week. Much of the fall season the home had tenants as well.

The first season results were:

Posted in Property Management Case Studies
no comments yet

Beth Dudley has well over a decade of real estate sales experience in the Topsail Island market and has called Topsail Island her second home since birth. 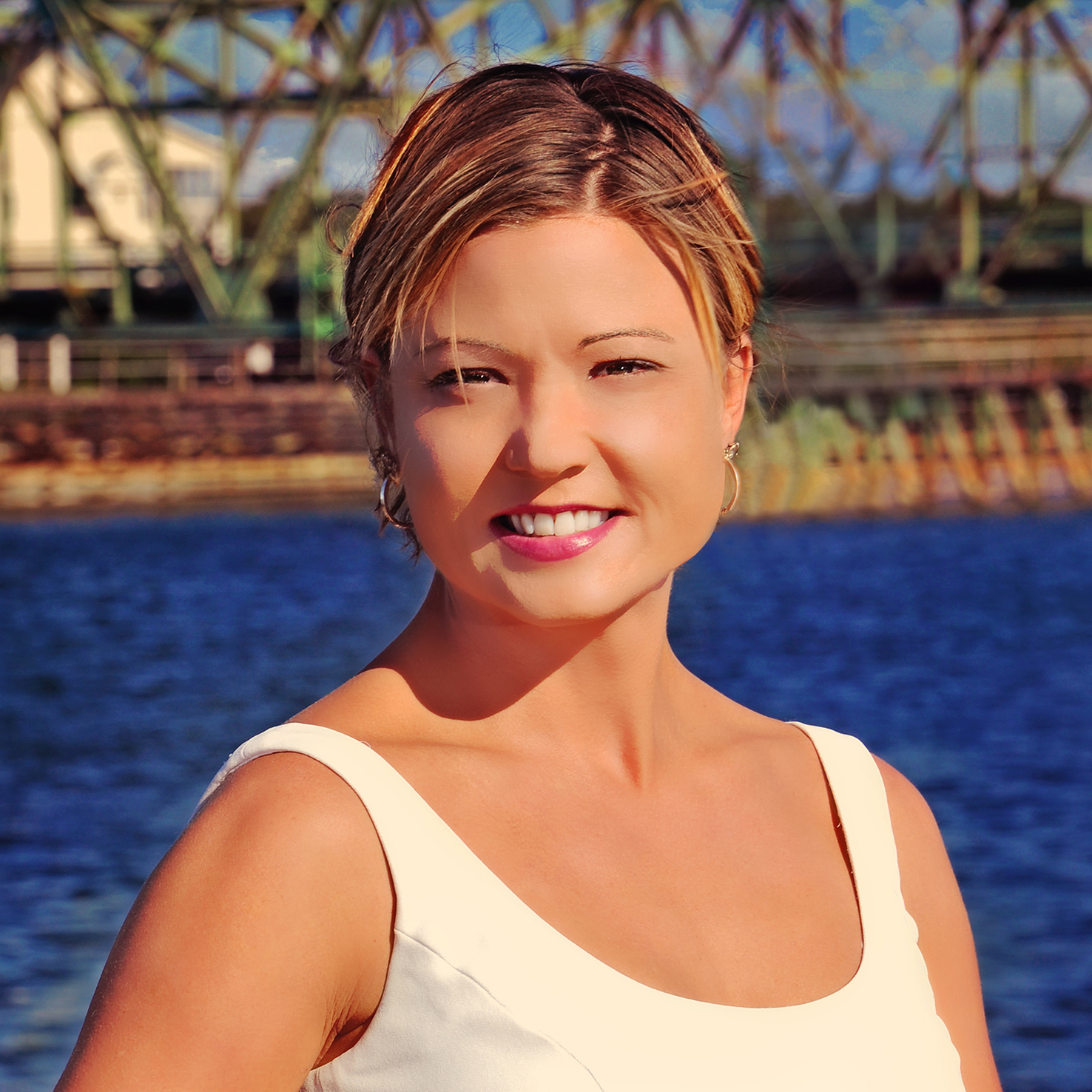 Beth, a graduate of East Carolina University in Greenville, NC, began her real estate career soon after. Beth brings vast experience in the local market having served as a Broker in Charge for a franchise company formerly located in Topsail Island not to mention the multitude of buyers and sellers she has represented.

Lewis Realty Associates, Inc. President, Chris Rackley stated, "I had always been interested in having Beth join our team. Late this fall the opportunity finally presented itself! Beth brings vast local and coastal knowledge, the drive to succeed and a loyal following of clients. Our team gladly welcomed Beth with open arms."

If you are looking for a waterfront specialist with knowledge of island real estate, Beth deserves a call from you.

Posted in Company News
no comments yet

This is not insurance advice. Lewis Realty Associates, Inc are not licensed for insurance brokerage or advice. This is only our interpretation of a press release. Contact your insurance provider for more information.

(coastal properties were as much as 35%). This would no doubt have been a determent to the real estate and rental market in all of North Carolina. In Topsail Island, it would have resulted in slower sales and higher rents; not a good thing for the state economy or the general public.

The North Carolina Department of Insurance headed by Wayne Goodwin must approve rate changes to better serve the public interest by providing a check and balance on rates.

On December 19, 2014, the commission denied the rate increase request by the insurance companies and instead mandated a 0% overall statewide rate change. This is slightly misleading because it appears to be figured on the state's average. Topsail Island would have seen as much as a 35% increase but rather will see approx 5.6% reduction.

Topsail Island has always been one of the more affordable beaches for both sales and rentals. This change in insurance rates should help keep that trend going.

Posted in Topsail Island News
no comments yet

Here is a list of the remaining holiday events as of 12/18/2014 in the Topsail Island, NC area. Topsail is always a special place but especially sure during the Christmas season!