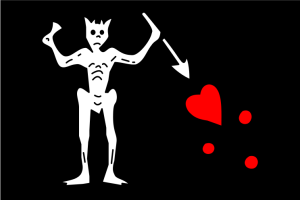 For Topsail Island, gone are the “Golden Days of Piracy” but the local legend still abounds.

Local lore takes us to the early 1700’s on a totally uninhabited Topsail Island with no bridges, ferries or the like. At this time, the eastern seaboard was home to the only ports for the “New World” with locations like Charleston, New York, Wilmington NC, and Bath Town, NC (present day Bath).

Queen Anne of England had recently done some “corporate restructuring” and laid off her fleet of hired pirates or “privateers” but there was opportunity abound in the new world.

Many of Queen Anne’s newly unemployed privateers did as any self respecting gentleman would do, start their own business; the business of self privateering.

Now in those days, if you were to glance out at the horizon, you would probably see Schooner and Freighter ships passing along our beautiful island on their way to the next port carrying precious metals, spices and supplies for the colonies.

Off our very shores of Topsail Island, names of history like Stede Bonnet, Charles Vane and the most notorious; Blackbeardsailed in search of their next catch, a heavily laden ship.

There was so much sea traffic off Topsail Island in those days that pirates really did not have to set sail to search for their catch, rather they would hide out and wait for some unlucky sailors to sail past them unbeknownst to the plight they had sailed into.

The Pirates were expert sailors, navigating their shallow draft “sloops” through the shoals and shallow inlets of present day Topsail Island hiding in the channels just behind the 220px-edward_teach_commonly_call'd_black_beard_(bw)island where they could quietly watch the sea lanes off our shores.

The shipping sailors soon learned of this new strategy and begin scanning the dune lines of Topsail Island in search of the pirate ship’s “Top Sail” barely showing from behind the island. Hence, local legend tells that is the original source of our island’s name, Topsail Island (pronounced TopSul).

Once the pirates sited the freighters from their crows nest, the chase was on and victory was had by the pirates more often than not. The lore of yester year places the most Notorious pirate, Blackbeard as a frequent to Topsail Island while on his favorite route from Charleston, SC to Ocracoke Island, NC and Bath Town, NC.

Blackbeard (actually referenced as Edward Teach, Edward Thatch or Edward Drummond) was a man of over six feet 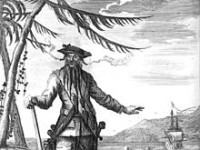 which was very tall in the 1700s. Blackbeard was a master at psychological warfare and feared from Barbados to New York. Blackbeard would tie cannon fuses and sulfur matches in his long braid beard, light them and become the devil incarnate in the eyes of his opponent as he showed no fear and gave “no quarter” (mercy). Topsail Island PiratesCan you imagine a man almost a foot taller than you, with fire in his beard, smoke around his head, pistols strapped to his chest, swinging a cutlass with another strapped to his hip, yea, and you can get the picture.

Near the south end of Topsail Island, in the town of Topsail Beach, there is a seemingly bottomless hole; the locals call it the “Gold Hole”. In the mid 1900’s, a team of treasure seekers came to Topsail from the North and identified that hole as the hiding place for Blackbeard’s treasure. They spent many weeks in the “Gold Hole” working until late at night. But one morning, they were gone with no warning, as if they had never been on Topsail Island. Some say the “Gold Hole” is no longer, as the treasure of Blackbeard was found and left on that summer night.

There are even legends of Ghost Ships from the Golden Age of Piracy along our shores.

At the southern end of Topsail Island, there is a barren island called “Lea Island”. Lea Island’s southern inlet, Rich’s Inlet is now a very shallow inlet although in the 1700’s was a deep and wide inlet which sailing ships frequented.

Many say if you are boating with your radar on, just as you pass Rich’s Inlet in the ocean, you may notice a “blimp” or “target” on your radar screen sitting just inside the inlet. You look back, but there is nothing there. As you cruise by, the “blimp” begins to move slowly out the inlet, coming into the ocean just behind you and then rapidly begins to track behind you . . . Just as Blackbeard did over 300 years ago!

I, the author (Chris Rackley) cannot attest to the hidden treasure or other local lore although I can tell you that I have seen this “Ghost Ship” on several occasions throughout my life. Is it Blackbeard? Is it Stede Bonnet? No one knows but we do know it is there!

Whether coming to search for the lost treasure of Blackbeard or catch a glimpse of the Ghost Ship . . . . Come to Topsail Island and see what you think!