In recent and surprising news, Lewis Realty Associates, Inc. President Chris Rackley announced on Friday in a close door meeting that the local Real Estate and Vacation company had reached an agreement to purchased the soon to be decommissioned Swing 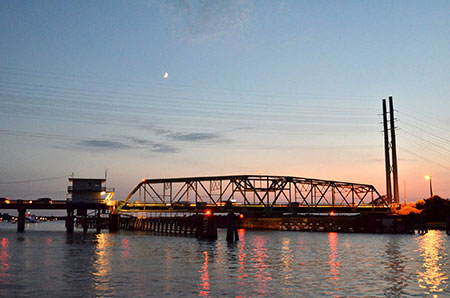 The negotiations have been on going for several years since the announcement from the NCDOT of construction of the new high rise in Surf City while state and city officials pondered about what to do with the remnants of the swing bridge.

In a public press release in process of being released Rackley had the following comments:

"When you think of Surf City, you think of two things, the swing bridge and Lewis Realty. It only makes sense for the bridge to be the next purchase of the fast growing real estate company. While at first we were going to make a museum of the bridge we have recently decided on some other plans . The bridge will be painted bright yellow (our company color) , have a giant Blue Heron placed on top and stay erected in it's place. The bridge will be utilized for Lewis Realty staff, guests and sales clients private access to the island. This will serve us well as we will be able to beat the 4th of July traffic with our own bridge and since it will be private there will be no speed traps by the Surf City Police department.  And of course, this will be a huge tax write off and as President Donald Trump says "it just makes us smart".  We may also consider allowing town officials access on several contingencies; they are able to secure beach re-nourishment while dropping the property tax rate not to mention building an exclusive Jeep beach park" , said Rackley in the recent press release.

Lewis Realty guests will be able to use the swing bridge being named the Lewis Realty Yellow Brick Bridge by 2018 and will be provided an exclusive fast pass decal for their car to gain access.  Lewis Realty will also grant fast pass access to Ginger Haired Women. Enforcement of access will be provided by real pirates stationed at each entranced and along side the bridge in their cannon laden pirate ship.

Rackley plans to have property manager Jessie Moore relocated to the Lewis Realty Bridge Works Department to serve as Bridge Tender allowing boats to pass as they come along the intracoastal water way if she sees fit to allow them to pass.

Rackley also further added, "This is a win-win for everyone in Surf City. Other companies clients can view the bridge they have grown to love from a far distance and our clients will continue to receive the best service on the island with private access to the island".

While booking and sales are sure to increase with this recent news we encourage all to view our Topsail Area for sale properties or Book a Topsail Vacation rental before it is too late.

Originally published April 1, 2017 as our first ever Corporate April's Fools Joke. We enjoyed writing a little creative satire and equally enjoyed all the funny comments, laughing emojis and such. Life does not have to always be serious!! Laugh you just might enjoy yourself!!! :)

I'm sick and you gave me my only laugh of the day so far. I only wish it were true!

Does this mean you are going to pay for all the office staff (ladies only) to have their hair dyed "ginger"?